WE ARE OPEN - LEARN ABOUT OUR SAFETY PROTOCOLS - LEARN MORE

Home/Blog / Breast Augmentation Most Popular Form of Cosmetic Enhancement in Santa Barbara, CA and U. S.

Breast Augmentation Most Popular Form of Cosmetic Enhancement in Santa Barbara, CA and U. S. 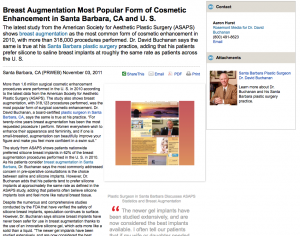 The latest study from the American Society for Aesthetic Plastic Surgery (ASAPS) shows breast augmentation as the most common form of cosmetic enhancement in 2010, with more than 318,000 procedures performed. Dr. David Buchanan says the same is true at his Santa Barbara plastic surgery practice, adding that his patients prefer silicone to saline breast implants at roughly the same rate as patients across the U. S.

More than 1.6 million surgical cosmetic enhancement procedures were performed in the U. S. in 2010 according to the latest data from the American Society for Aesthetic Plastic Surgery (ASAPS). The study also shows breast augmentation, with 318,123 procedures performed, was the most popular form of surgical cosmetic enhancement. Dr. David Buchanan, a board-certified plastic surgeon in Santa Barbara, CA, says the same is true at his practice. “For twenty-nine years breast augmentation has been the most requested procedure I perform. Women everywhere wish to enhance their appearance and femininity, and if one is small-breasted, augmentation can beautifully improve your figure and make you feel more confident in a swim suit.”

Despite the numerous and comprehensive studies conducted by the FDA that have verified the safety of silicone breast implants, speculation continues to surface. However, Dr. Buchanan says silicone breast implants have never been safer for use in breast augmentation thanks to the use of an innovative silicone gel, which acts more like a solid than a liquid. “The newer gel implants have been studied extensively, and are now considered the best implants available. I often tell our patients that if my wife or daughter needed an implant I would definitely choose silicone gel.”

Dr. Buchanan’s Santa Barbara plastic surgery practice is located at 427 W. Pueblo St., Suite A, Santa Barbara, CA 93105. The practice can be reached at (805) 762-4200, or found online at sbplasticsurgery.com, santabarbarabreast.com, or facebook.com/pages/Santa-Barbara-Plastic-Surgery-Center/90407104284?ref=nf.